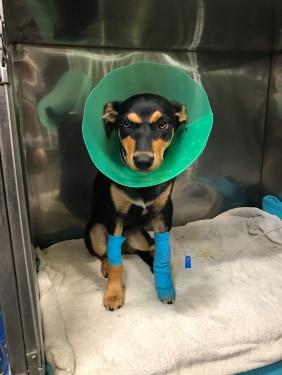 Bundy was seen to by our team after swelling developed in her shoulder and she'd become lethargic.

Upon examination, it was noted that her gums were pale and that the swelling was caused by bleeding under the skin. Further probing confirmed that Bundy was experiencing symptoms of rodenticide (rat bait) poisoning.

The poison she had consumed was brodifacoum, a highly potent anitcoagulant poison. With this poison, symptoms may take 3-10 days to develop after ingestion. Poisoning can also occur indirectly through ingesting a poisoned mouse - it's that toxic. This rat poison prevents the blood from clotting and results in life threatening bleeding, as Bundy's case who lost more than HALF of her red blood cells. Thankfully, there's an antidote.

Bundy received intensive care over the course of three days, with our vets carefully monitoring for bleeding and her red blood cell concentrations. Bundy made a fast recovery and thankfully returned home to her loving parents, but will need to continue receiving the antidote for at least the next 4-6 weeks as the poison remains in the body for extended periods.

It's important to keep rat bait away from the reach of pets, and in places where mice can't drag the baits out into the open (e.g. a mouse could knock a bait off a high shelf). If you witness your pet ingesting bait, it's critical to present them to a veterinarian immediately. Although symptoms may take several days to develop, the poison will begin causing damage immediately, and treatment needs to be administered as soon as possible after consumption. There are a number of types of rat bait that can have different effects on the body, so it's important to note the active ingredient in order for your veterinarian to provide appropriate treatment.